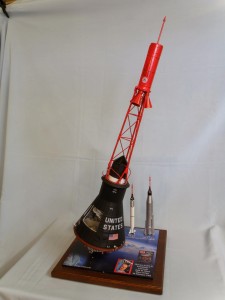 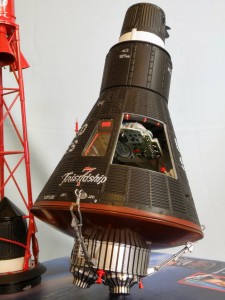 I think many modelers have seen this kit and wondered how it would look.

This display uses the Mercury capsule from Atomic City/MRC in 1/12 scale as the centerpiece.  The 2 launch vehicles used in the Mercury program are the 1/144 scale Redstone and Atlas from Real Space.

I decided to build the kit to represent John Glenn's Friendship 7.  The base image includes the cover art from Time and Life magazines of the day.

The exterior of the kit is reasonably well details and not a particularly difficult build.  However the interior is somewhat disappointing in detail.  This does provide for a great opportunity to add whatever details you want.  I have seen some other builders go much further than I but I was pleased with the results.  In an effort to show off the interior, I added 2 lights that are actually in the same positions as 2 of the cabin illumination lights in the real capsule.  The power source is a AA battery mounted in the base.

By far, the most challenging part of this kit was the black strip decals applied to the retro rocket package.  Each black strip you see is a separate decal.

If I had to make a suggestion for improvement of this kit, besides more interior detail, I would point to the capsule periscope that would protrude from the underside of the capsule.  It would be a great opportunity to show some external detail.  I considered trying a scratchbuild of this feature but I could not find a very good reference to use for the proper look. 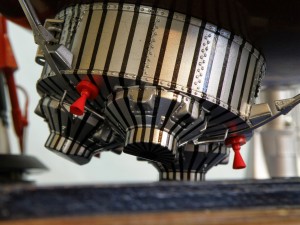 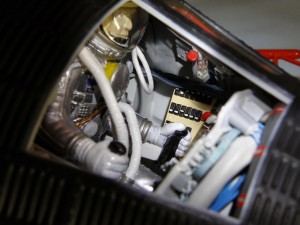 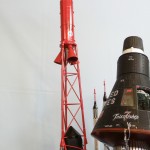 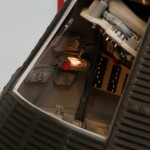 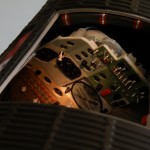 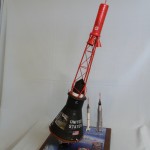 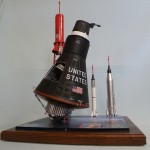